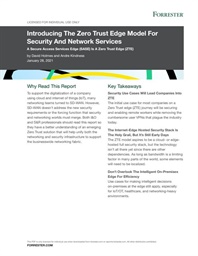 To support the digitalization of a company using cloud and internet of things (IoT), many networking teams turned to SD-WAN. However, SD-WAN doesn’t address the new security requirements or the forcing function that security and networking worlds must merge. Both I&O and S&R professionals should read this report so they have a better understanding of an emerging Zero Trust solution that will help unify both the networking and security infrastructure to support the businesswide networking fabric.